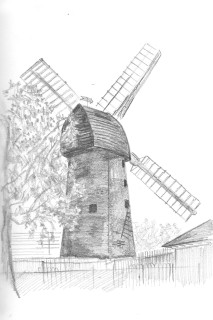 Later in July, I am travelling to Amsterdam, to take part in the annual Urban Sketchers international meet-up.  Of course, I am very excited to meet with hundreds of other sketchers and to draw scenes of Amsterdam.  And when an English visitor thinks of Holland – tourist cliché alert – that includes windmills, doesn’t it?  So, maybe some practice is in order.

Did you know we have windmills in London?  My fellow sketcher, Lis Watkins (both of us are admins for Urban Sketchers London) and I set off to explore.  We found and sketched three in South London, from left to right: in Wimbledon, Brixton, and Shirley, near Croydon.

The wonderful windmill sketches of Lis Watkins can be found on the international website of Urban Sketchers, where she is one of the London correspondents.

View all posts by Jo Dungey